During the best of times it's not hard to see the attraction of living on a river, or lake. We could get out on the boat every day, and there were plenty of times when we were water skiing at daybreak on a mirror glass water surface. In addition to the boating and fishing being readily available, there were less neighbors and noise to deal with. But by 1995, with all of the development in the Meramec River water shed, the Meramec changed from being a river to being a storm sewer. Rains upriver produced quicker floods than in earlier days, and an all day rain with already bank full river levels, didn't bode well in May of 1995.
Monitoring the river gauges became religion, and my calculations based on past levels and the current predictions told me we were going to get water on our second floor. I called the movers and they took away all of the furniture on our first floor. I had the second floor set up so that almost everything could be placed up high. I even had our king sized bed perched up on two picnic benches, kept handy just for this purpose.
Like always, our plan was never to evacuate if we could manage it and even though this flood wasn't like the calm back water flood of '93, I felt that our home set back enough from the main current that there wasn't a huge safety risk. Notice I said, "huge".
We were as prepared as we could be on the day that the water was to reach our second floor and I went to work as scheduled. When I came home, the water was high enough for me to park the Jon boat on the roof of our garage where I waded through muddy water and into the house. 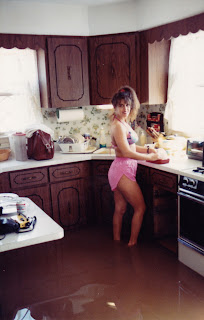 Here's Rosie preparing a meal in our second floor kitchen in ankle deep flood water. I had separated the electrical circuits based on how high they were located on the walls, so we had power to make meals in the microwave or toaster oven. 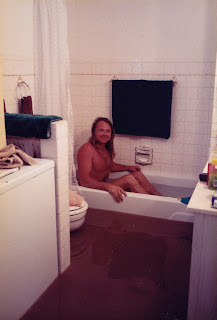 Here I am taking my evening bath. The flood water was about a foot deep by this time, but the bath water was crystal clear. The routine called for drying off and wading through the muddy water to the bedroom, climb up into the bed previously raised a good two feet up on a platform, dry off the legs and feet, and then remember not to jump out of bed too fast in the morning.
I will fully confess here, that staying in our house at the height of this flood, with the current rolling in the channel, was not the smartest move I ever made. Couple this with the propane tank incident, it's a wonder I'm here to write this. It just so happened that on the first night of sleeping in our house with the water on the second floor, there was a thunderstorm. As we laid in bed, the wind was howling and the waves whipped up by the wind and current bashed against the walls of our home, and I gave Rosie the all important safety tip for the day: "Pull the covers up over your head and try to ignore it". I was around working with my dad over twenty years ago when the anchor bolts were buried into the brick and limestone of the foundation and the sill plates were bolted down about every 4 feet. I felt confident that the house wasn't going anywhere, but even though we survived the ordeal, I believe now that the confidence was a false one.
By morning, the flood waters had begun to recede. Clean up began immediately as the electric power washer could be used indoors as opposed to a gas one.
Another big renovation was in order. I tore out the whole interior up to 2 feet into the second floor and pulled out all of the insulation and replaced it with closed cell foam that water wouldn't ruin. The traditionally paneled walls on the first floor were lined with 3/4" thick exterior cedar siding and coated with three coats of oil based paint that allowed for an easy clean up. Our flood insurance pay off allowed for some other improvements, and we put every bit of the money back into our house. 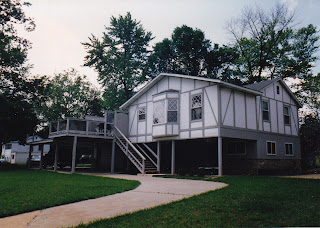 This is how our home looked after all the improvements were made after the '95 flood. Most of the flood mitigating measures can't be seen here, as they were mostly interior items, but one addition that can be seen is the stairs built on the outside of the house to eliminate the need to climb an extension ladder to gain access to the second floor during a flood.
There were actually two floods in '95. We had to suspend remodeling at one point as the water rose back up after the May flood. We had high water again two more times within the next two years, a total of 4 floods in three years. One thing you might notice is that I have never mentioned sand bags. I can honestly say that not one time during our river home ownership did we resort to sandbags, as not only did the geography of the land not lend itself to sandbagging, the clean up of all the sandbags afterward didn't seem any easier to me than cleaning our the house after a flood.
Another thing that was not mentioned in my story here is any complaints from Rosie about living with flood risk. But some time after the last flood for us, I think in 1997, Rosie simply said one time that she wasn't sure how many more floods she could take. The seed was planted, and within a year, the decision was made to sell our home.
Our old place is still there at 92 Opps Lane in Fenton, although it's in a major state of disrepair. In fact, all of the homes on Opps Lane now appear to be in disrepair. There are folks that live on the river because they love it, and there are those that live on the river out of necessity, as the price of homes are low and taxes are cheap. The current residents of Opps Lane now seem to comprised of the latter. We have only returned there a couple times to reminisce because it's too sad to see the place falling down after all the work that was put into it for nearly 30 years.
Floods nowadays are received by us calmly, as a matter of fact, after what we have gone through over the years. The river can now only lay claim to the bottom side of Swing Set, barring any extraordinary calamity.
Posted by Swing Set at 5:10 AM