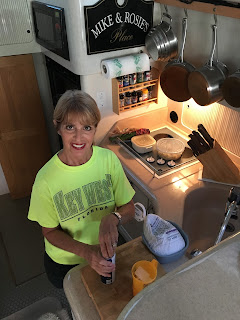 We saved Christmas dinner for the arrival of some friends from St. Louis on the 27th of December. They got in late due to some plane delays, and their stories confirmed our intention to never fly on an airplane again. The late dinner and the interesting conversation lasted until the wee hours while we formulated a loose plan for the next couple of days.
A day long cruise was planned for the 28th and the weather held for us to enjoy a pleasant day on the hook. Swing Set ran great and we were presented with no new problems for our anticipated departure from Marathon on the 30th of December, the day our friends were due to leave back to the cold and flooding of Missouri. I had been watching the weather for a couple of weeks, and our best window was between the 31st of December and the 2nd of January, so getting a days jump on our trip was taking a bit of a chance, but we decided to plan on the 30th, but use another day for a backup if we needed it. 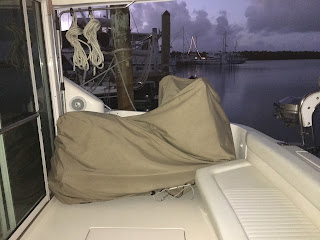 On the morning of the 29th we moved Swing Set over to a lower seawall at high tide to facilitate the loading of our scooter. Our new scooter is heavier and bigger than our older Zuma, and James and I were happy to acquire the assistance of another person at the pool where we found a good place at the seawall there to load up the bike.
The four of us did a "send off dinghy cruise" all afternoon, and said our goodbyes rather early. They had a long drive to Ft. Lauderdale ahead of them in the morning, and we had the start of our trip to Dunedin to look forward to as well.
We were up before dawn on the 30th and the picture below shows the Yamaha strapped down and covered for the 250 mile trip to Dunedin. Before the first light I removed all of our power cords, water lines, and cable from our slip at Marathon Marina and we creeped out of the harbor as the sun was coming up.
I knew the wind was going to be up a bit, but I also knew that it was to subside by the time we got closer to the mainland and the relative protection of the mainland from the easterly wind. As it was, instead of wallowing through some beam seas at trawler speed, I spooled up the Cats and ran at 25 M.P.H. for about three hours until the seas calmed and we took the rest of the day to slip into Indian Key Pass to spend a restful night on the hook near Everglades City, an anchorage we had stayed on our way down the coast over three years ago. Our faster cruise for three hours allowed us to happily bypass our previous anchorage on the Shark River back in 2012.
Before dawn on New Years Eve we were headed out of Indian Pass towards Fort Myers. Some friends in the area had plans for that evening, but even so, the weather window we had dictated that we get to Dunedin as quickly as possible. I was going to run outside as far as Charlotte Harbor, but I began to get concerned about fuel, not so much for how much we had onboard, but I was concerned that if we needed it on New Years Day, some marinas may be closed and fuel would be hard to find. I decided to enter the Intercoastal Waterway at the Caloosahatchie River and we took on 150 gallons of fuel at Sanibel Marina and was on our way again by mid afternoon, finishing out our day at our accustomed trawler speed. 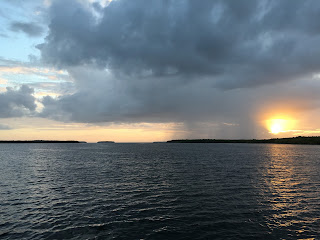 Our choice of anchorages began to get pretty slim until we happened upon an excellent spot just off the waterway that was in a no wake zone. We were near Little Gasparilla Key when we dropped the hook and enjoyed a nice dinner and a movie before turning in before 8 P.M. Happy New Year!
We cast off the next morning before the first light, relying on our iPad and Garmin to follow the narrow channel. We kept our speed at idle until we could actually see anything by 6:30 A.M., and then we ran at 8-9 M.P.H. until reaching the Venice Pass and outside we went.
Swing Set ran for the next four hours at 25 M.P.H. without a hitch. The only issue, as it had been on the outside since leaving Marathon, was dodging crab pot markers. Some of those fishermen paint their markers dark green or black, making them almost impossible to see unit the last minute. Our luck held and we didn't hit any of them. I'll never eat crab or lobster again.
We had to go way outside to avoid the shoaling at the entrance to Tampa Bay, but with plenty of fuel, and with the engines running so nicely, it was fun to get some wind in our hair for a change. When the boat is running good, it's nice to have the option of running at something other than trawler speed when we want to. I know that 25 M.P.H. is not much, but hours of 8-9 M.P.H. gets tedious.
By early afternoon we were entering the Clearwater Pass. Plenty of other boaters were out enjoying the holiday and we passed lots of boats in the narrow channel running from Clearwater to Dunedin before we made the eastern turn into the channel to Marker 1 Marina.
As we passed the fuel dock I hollered to a young attendant that I wanted to tie up alongside the fuel dock to unload our scooter. She welcomed us in and helped us tie up. Without insulting her, I asked if a more stout dockhand might be available to help unload our scooter from the boat. We needed some muscle.
"Nicky" called for "Tony", a part-time personal trainer to come and assist us. When he arrived, I had both ramps in place and Tony almost single handedly removed the Yamaha from the confines of our cockpit. We were so happy to have the scooter off the boat, and not into the water, that we generously tipped both Nicky and Tony. I've decided that our current scooter is really too big to put aboard Swing Set.
We motored over to our slip and spent the next couple of hours getting lines adjusted and installing our power cords, etc., while introducing ourselves to some of our new boat neighbors. 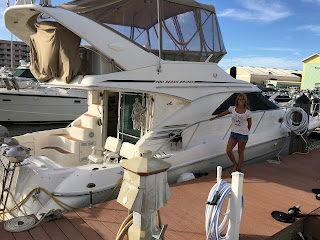 With fenders in place, hoses installed, and cable hooked up, we were really happy to have it all behind us. Really, really happy with our slip location and with the marina in general.
That night we walked over to a newer bar/restaurant across the street, Frenchie's Outpost, where we had our own New Years celebration with a couple of beers.
Yesterday, some folks we had met at Kentucky Lake drove over from Land O' Lakes to visit us before driving back home to Kentucky. We had a pleasant visit and were sad to see them go, but they'll be back in February, so saying goodbye wasn't so bad. They offered to take us back the way they came so that we could pick up our vehicle that we had left near the townhouse we are buying. Saved us a trip on the scooter in the approaching cold weather on Sunday.
As expected, a cold front, along with some blustery wind, came in on Saturday night. Boy, were we happy to be snug in our new slip! We had our vehicles parked safely away, and Swing Set tied up nicely too. We both slept better than we had in several nights.
This morning we kicked off our new digs with another walk across the causeway to a cozy restaurant called Brenda's Cafe where we had a good breakfast and met some locals. We got there at 7A.M. and by 8A.M. the place was packed. We both had a reasonably healthy meal for half the price we would have paid in the Keys, and the company was very enjoyable. This is not the home of $11 omelets.
After posting this, we'll scrub down the boat and flush the engines as well as pickle the A/C system with fresh water. We won't be needing air conditioning for a while. The trade off for warm January weather is a healthier bank account and more services for the us and the boat.
Once we get settled in here, and close on our new home purchase, cold weather relief is just a day long boat ride down the coast. As it is, a little variety never hurt anyone.