We Head Back Down River

Once we decided to stay put across from Fairport Landing on the previous day, we knew that we had reached the half way point of our trip. Rosie had to be back to work on Monday morning which gave us the three days equal to our up river trip, plus one extra day for unexpected incidents, to get home. So on Thursday, the 25th of August, when we woke to another gorgeous day, we pointed Swing Set south and started making our way back. 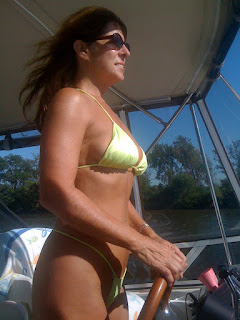 This day also was Rosie's birthday, with her turning a young 53. I took this picture with Rosie at the helm as we started back downriver. As you can see in the picture, Rosie has resisted wearing a granny-kini, more typical for women of her age, and goes with something that has a little less material to mess with. Works for me, and apparently with some of the lock attendants.
We really couldn't believe our good fortune as to the weather we were experiencing so far during our trip. The only clouds we had were as we entered Lock and Dam 25 as we started out, and there had been no rain at all. We can stay dry from our helm on the flybridge, and there is no helm below, but cruising is always more enjoyable when the weather cooperates.
To maintain our 8 miles per hour speed during the upstream portion of our trip, we ran our Cats at 1200 R.P.M. I backed off that a little coming back downstream, decreasing our fuel consumption, but increasing our speed a bit with the help of the current.
We took turns at the helm throughout the day and we breezed through 3 locks. As stated earlier, the lockmasters will allow "floating free" when locking down, so we took advantage of the privilege, saving us some time locking through. We still deploy fenders on one side of the boat, typically the "lock side" (the side of the lock away from the dam) just in case the wind catches us and we need to snuggle up against the lock wall.
It might have been natural for us to have stayed in the same anchorages going downstream as we had used coming upstream, but time in locks and a faster speed changed all of that.
We were making very good time, and Burlington, Iowa became our goal for the day. Burlington was only 58 miles from Fairport, but with the three locks in between, was a fairly optimistic target for a day's cruise at our speed. Burlington came into view as the better part of the afternoon had passed. 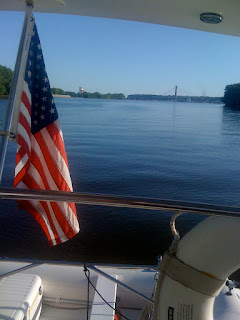 The Flint River empties into O'Connell Slough just upstream from Burlington and we dropped the hook just enough up into the slough to get us out of river traffic and still within sight of Burlington. Although not one of my better pictures, you can see the suspension bridge going into Burlington from our anchorage. On our way upriver, I had noted the presence of transient docks lining the Burlington riverfront, along with an abundance of enticing restaurants to choose from.
As is our routine, once we got the anchor set, we relaxed in the cockpit taking in the view and confirmed that we had a good hook. After making ourselves fit for public consumption, we dropped the dinghy and slipped on down to the Burlington riverfront, leaving Swing Set sitting pretty with the anchor light on. We were headed for a proper birthday dinner.
Just a few steps from a long courtesy dock where we tied up and locked the dinghy, was a gigantic riverside restaurant called Big Muddy. We could see a fair amount of activity at the place, so we chose Big Muddy to celebrate Rosie's birthday.
After a dubious beginning when I had asked the hostess for a table on the patio, and she asked if I wanted to be seated "outside", and I said, "Well, we're not from around here, but unless you have a patio inside, we'll go ahead and take a table on the patio outside".
When the table outside wound up overlooking a parking lot, I summoned our waitress and admitted to making a very horrible mistake, and that indeed we wanted a table inside.
There were plenty of tables available indoors as the place is GIGANTIC, so the poor girl directed us to a window seat with a great view as I made a mental note to redeem myself by tipping heavily no matter what the service was afterwards.
I avoided anything with a creamy dressing, choosing oil and vinaigrette for my salad. We started off with some wine as we were "beered out". We aren't wine snobs, and a house wine is sufficient for either of us. I'm a beer guy and will remain so as long as possible, but I have a feeling rum will come into the picture when we get to the islands. Rosie has already forgotten what she ordered, my money says it was some variation of chicken as usual, but I had a steak. The steak was nothing to fuss about but the dinner was pleasant, the view was outstanding, and the wine made the event even more blissful.
It was pitch dark when we got back down to the dock to unlock the dinghy. The lesson for the evening turned out to be the need for equipping ourselves in the future with a light to see the numbers on the combination lock in the dark. The effects of the house wine delayed my decision to finally whip out our iPhone and use the lighted screen to see the numbers on the lock, being careful to avoid giving the phone a bath.
We switched on the running lights on our dinghy and made way for the shining beacon of the anchor light on Swing Set. We have a dusk to dawn light in the cockpit that is activated with a motion detector and as we got within range, the light came on and welcomed us as Rosie attached the painter to a stern cleat and we left the dinghy trailing behind Swing Set for the night.
I checked the weather report and we caught the late news before we turned in; all in all a wonderful day and evening.
We got an early start the next morning even after waiting for an early morning fog to lift. The bridge tenders at the Burlington lift bridge were on the ball again as the bridge started raising as we got close. the bridge tenders and us gave each other hand waves as we passed under the raised bridge, and headed for the swing bridge at Fort Madison. Thankfully the crabby bridge tender we encountered on the upstream pass was absent on our return trip and we slipped through Fort Madison easy as pie. 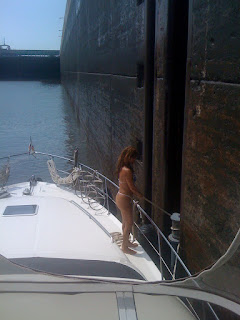 When we announced our approach to the Keokuk lock, we were met with a pleasant response to "come on in skipper" and we locked through at Keokuk slick as a whistle. The picture above shows the wet lock wall as we were dropped to tailwater level, attached to the floating bollard.
When we exited the Keokuk lock we came upon the stern of a long tow, the Jerry Jarrett. The river is curvy in this area, so we asked for some assistance in passing and received some cheerful instructions to "pass on the one whistle". There was some traffic on the marine radio about a distressed vessel up ahead. We slowed down to a crawl as we passed a tow headed upriver that had gotten hung up on a turn in the river and two tugs were hard at work trying to get it unstuck. We passed another tow, laden with scrap cars, after getting some more passing advice. The captains of these tows have always proven to be accommodating if possible, and courtesy is met in kind, if given.
It was mid afternoon by the time we arrived at the Canton Lock, and as there was a tow locking up, we had to wait for an hour or so to lock down. There was a sailboat waiting as well, the mast was stowed and judging by a banner displayed in a language I recognized as Swedish, we learned that aboard the boat was two world travelers. Their English was minimal, and our Swedish is negligible, so the conversation was limited to a couple of "hellos and good luck on your trips".
We kept our steady pace as we left the Canton lock, headed for Quincy, Illinois where I had wanted to spend the night. Considering that we had passed two fixed bridges and locked through twice, our arrival at Quincy marked the accomplishment of a 78 mile day.
We were a little tired as we came within site of the Quincy Lock, but any decision to make the lock and keep on going was settled when we saw a double tow waiting to lock down. As it would have taken us past dark to lock through with a long wait anyway, I guided Swing Set into the slough at the Quincy Boat Club and Art Keller Marina.
Rosie and I had accomplished our normal bathing ritual while waiting at the Canton lock, (If a couple of Swedes couldn't handle two naked river bathers, who can?)  So as the sun set, all we had to do was break out the grill and start dinner. 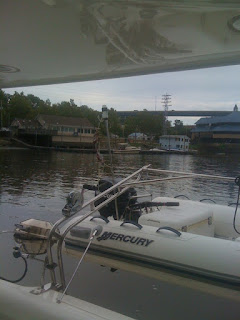 Here we sit in front of the Quincy Boat Club; the grill is going and I have a pan of rib tips cooking slowly, to be joined later with some scalloped potatoes. Is it possible that we celebrated the end of another productive day with a cold Bud Light or two? Darn skippy, it was.
Some locals apparently out for a bachelor party kept sharking past with their stereo loud enough to wake the dead, or so they thought, I guess. They were pikers compared to what we are used to in the way of stereo wars. We let 'em think they were impressing us and all we shared was a wave or two. A late night party was not on our agenda.
We were making good time, and we still had two full days to get home, but the possibility of attending a late BBQ on Saturday night back at our home port entered our minds. With four locks to go, we weren't going to push ourselves to make it, but we started to not rule it out. Our success in making timely lock throughs would tell the story as to whether we would make the party or not.
The party on the houseboat continued into the wee hours, as it was a Friday night, but we were oblivious to the noise as we turned in after a very long day and fell right asleep.