Changes On The Horizon 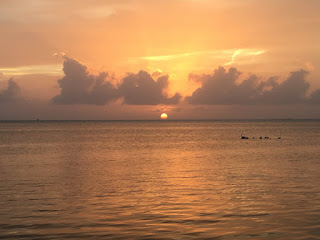 The view from the stern of Swing Set looks the same...but not for long.
We are ones who embrace change, we look forward to it, and encourage it. In fact we are catalysts for it. There is a big one coming up.
But first...When we returned from our trip to Key West, which was one month after returning the boat to the water after bottom painting, I finally got around to checking the bottom to see how our new paint held up. It did, and it didn't.
The paint on the hull looked fine, with the exception of some "wrinkles" where the straps on the travel-lift smashed the new paint, as we didn't allow for it to dry long enough. Check one lesson learned for next time. The major disappointment was that I found that the paint on all of the metal had sloughed off on a wholesale basis, right down to the bare metal. Ouch. This was the main reason we hauled the boat in the first place because the PropSpeed didn't hold up. Now I have to give the Interlux Primocon a thumbs down too, even if I didn't apply it properly, at least for the time being.
The whole bottom painting debacle is what got me started thinking about moving the boat further north, allowing us to have cheaper rent, have access to more boatyards for service and bottom painting, and to also look into real estate that was not so ridiculously overpriced. 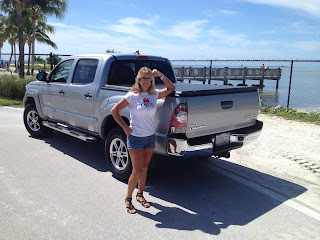 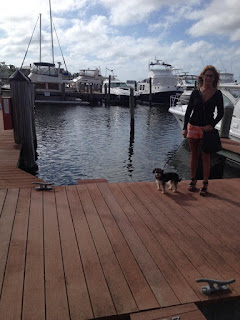 We requested a slip with a long pier on one side so we could deploy the dinghy if we docked bow in. There are only a handful of slips in the whole marina that have long finger piers on one side, and such a slip was reserved for us. Rosie is standing in front of it for the photo. There is one row of boats blocking our view of the open water, but given our experience here in Marathon Marina, the additional protection will be welcome in a southerly blow. 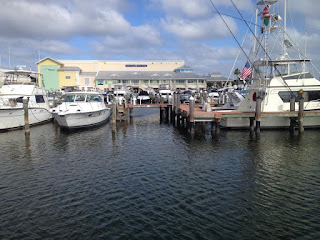 Here's a view from the outer dock. The slip we wound up paying a deposit on is the empty one in the middle of the picture. Sure, we would really like a floating dock, but at $11 per foot, per month, we can exist just fine in this slip. It's officially ours on January 1st, paid in full.
We had called the owner of the townhouse for sale earlier in the day and as we made our way to downtown Dunedin, we got a call back and was told that we could view the property the next day, so we made an appointment for 10 A.M. on Sunday. We couldn't wait to see it.
We had lunch in Dunedin at a place called the Living Room. We ate outside where we could have Holly with us, and there were several other dog owners having lunch too. Servers brought doggy water bowls and strips of bacon for the pets. We won't let Holly have bacon, but I asked for a strip for myself.
A drive down Mainstream Dunedin was a delight. The town appears very clean and there are lots of restaurants and bars. An outside bazaar was in full swing, and parking is totally free. I said free. We were impressed with Dunedin, it has a true "Old Florida" feel.
We met the owner of the property we wanted to see at 10 o'clock sharp. We held back our enthusiasm as much as we could but without even talking to one another, we both knew that the other liked the place very much. After a thorough tour, we spent some brief time alone, rejoined the owner and made an attractive offer, but less than the asking price.
The owner countered reasonably, and we agreed, but only if we could sign the contract that afternoon. By 2 P.M. we were signing the contract for purchase at the real estate office, with possession to take place on February 1st. We spent the rest of the afternoon having beers with Dee, the seller, asking about her experience at the resort and her plans for when she moves. Turns out Dee and her husband only had the place a couple of months before he had a stroke and died. Dee put her energy and dealt with her grief by focusing on going ahead with major renovations to the townhouse, of which we will now benefit from. We left at nearly 10 P.M., new owners of a place on land to call home, as well as a new friend.
Our other friends in the area said that we could never be accused of dragging our feet.
One word about the townhouse; the second bedroom is a separate lock-out, complete with a kitchen, bathroom, small sitting room, a nice sized bedroom, and an outside covered and screened in deck, that a person or couple could live full time in. We'll rent out the "studio" by the night, week, or month for extra income. In fact, we have the studio rented already for the month of March!
We spent two full weeks exploring around what is to be our new "land home", and was amazed at the changes we found and were pleased to see the results. We think that the variety of trading time between the resort and the boat will keep everything fresh for us.
One thing that we think we'll find is that the area we'll be boating in is better suited for what we like, with plenty of beaches, and with the protected water of St. Joseph's Sound to transit between Clearwater and Anclote Key. We'll meet folks at the resort, as well as friends we already have in the area, to take as guests out on Swing Set, something we like to do to get the most enjoyment out of our boat. We'll have more on that later.
One thing is that we won't be spending so much on dock rent that we don't want to leave the dock. I think we'll be more inclined to take some week long, or longer, trips and not worry about how much we're paying for a slip that we're not in. We can dinghy to all of the many beaches in the area without being in open water, and leave Swing Set in the slip if we want. If the weather gets cold in Dunedin, we can cast off and head for warmer weather and still have all the comforts of home. This is something we're used to.
Tarpon Springs does have an abundance of boatyards. If you don't know it, Tarpon Springs is largely a Greek community, and the Greeks there still hold to their boating roots. I have an eye on one boatyard in particular, Pittman's Yacht Services, where we'll pop in and talk to them about getting some anti-fouling paint on our running gear that will hold up.
As it is, we're back in Marathon to spend the holiday, and some good friends are coming to visit on Sunday. They're here for a short stay, and then we'll head out of here by New Year's Eve and point the boat towards Dunedin, weather permitting of course.
Some changes to the blog are probably in order since we're not officially "live aboard full time cruisers" any longer. But if you've been paying attention, we haven't been that for a couple of years now. We'll still be swingsetonthehook, but will probably change the description, and hopefully still be able to give you something to enjoy reading about occasionally.
Posted by Swing Set at 8:12 AM 3 comments: 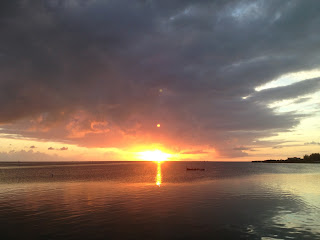