We Enter Iowa On Our Mississippi River Cruise

We didn't get such an early start on Tuesday morning as we had the previous day. I mopped down the decks, using the heavy morning dew, as Rosie made us breakfast and we ate it on the hook.
It's only fair for me to tell you that at the time of this trip, I had no intention of writing a blog; so the only notes I have is the ones on our fuel log. I'm using charts of the Mississippi and my scant memory to reconstruct our itinerary, along with some of the few photos I took. Details may be sketchy. I'm not one to enter every turn, or engine room check, into a logbook; seems too much like work to me. Recreational boating should not be a chore.
That heavy morning dew indicated an upcoming bright sunny day, and weren't disappointed. One hour after pulling up anchor we motored into Lock and Dam 20 at Canton, Missouri, mile marker 343. As far as I remember, it was uneventful. The Mississippi became a bit twisty and curvy after the Canton Lock, with lots of islands and sloughs. The Des Moines River came into view on our left at mile 361, marking our entry into Iowa territory. 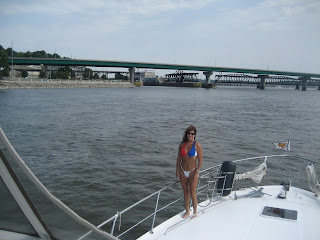 As we neared Keokuk, Iowa, commercial traffic was heavy as there was a lot of industry along the river bank. The picture above shows Rosie on the bow as we approach Lock and Dam 19 at Keokuk. This dam is a hydro-electric outfit; supplying electricity for the city of Keokuk and surrounding areas.
Our Quimby's guide told us that we would be rising quite a bit in this lock, some 18 feet or so. Compared to some locks on the Tennessee River down south, this elevation rise isn't much, but was considerably more that the 6-8 feet rises we had experienced on our trip so far.
Rosie got the fenders ready after we called the lockmaster and was directed into the chamber. We were instructed to utilize the floating bollards, so Rosie wrapped a line from a midships cleat, and held the other end in case the bollard hung up. I stayed at the helm with engines running "just in case". As we floated up inside the lock, the attendant was close by and very chatty. It may have been the fact that Rosie may have been the first woman in a bikini he had seen all day. May have been the first one he had seen all summer. 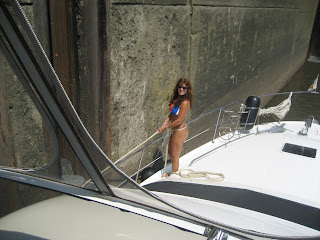