One thing that has been a challenge at our new marina is dealing with a larger tidal swing than we had to contend with in the Keys. People with much larger tidal swings along the eastern coast will laugh, but everything is relative. Going from a one to two foot rise and fall at the dock twice a day to one of three feet or more meant some changes in the routing of our shore power cords. These were small things, but essential at a fixed dock. 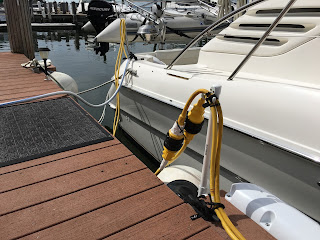 One thing we learned from experience, (and should have learned from marina management) was that during a full lunar cycle, when the tides are at their greatest, the water in St. Joseph's Bay goes over our dock, sometimes by as much as a foot, depending on the wind.
Since we are docked "bow in", we had to run shore power from the pedestal at the bow to our power connections at the stern of the boat. With 50 foot power cords, this meant a connection between the two sets of 30 amp cords.
I used a short piece of PVC and attached a hook to the top of it to hold the connections up from the dock. The connection will rise up as the boat rises, and keep our shore power connection from getting wet and shorting out. I also bought a shore power holder from Defender Marine that sticks into a rod holder on the stern. Now there is enough slack in the power cords to account for a tidal swing without the cords ever laying in the water.
As I'm on the subject, let me emphasize the importance of avoiding the habit of many a boater of leaving power cords dangling in the drink. Sure, the cords are rubber, but rubber is porous to an extent, and power can leech through the cord and cause stray current in the water. Wonder why your hull and running gear zincs are dissolving so quickly at your marina? There is a good chance that there's a stray electrical current running to your boat and most marinas won't do anything about it.
We have pitting on one of our props from stray current running from a neighboring boat when we were at our home port at The Duck Club Yacht Club back on the Mississippi, and we couldn't pin down the source. I wound up installing a large sacrificial zinc running from the ground on our pedestal into the water at the end of our slip. This solved the problem in the short run, and stopped the corrosion of the prop, which we still use.
If you suspect something similar happening at your dock, you can get an electrician with a tester to see if there is in fact stray current around your boat, but one no brainer is to make sure neighboring boats aren't leaving their electrical cords hanging in the water. 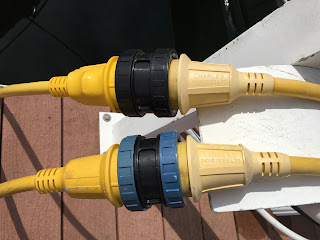 I'm a little slow on the uptake at times, and it took me all these years to learn how to properly connect our shore power cords. In the photo, you can see how our cords are connected to each other at the 50 amp adapter at our power pedestal. The collars we bought are screwed together at each side, not only making them pretty much sealed from the weather, they won't pull apart at the modest twist connections if they get tugged on. I like these and put them not only at this junction, but also where the two 50 foot 30 amp cords are connected in the first photo. I will say that the threads are very fine on these collars, and they are plastic, so be careful when threading them together or you'll render them useless.
One of my brain storms resulted in my purchasing a "smart plug", which is a wifi device intended on being plugged into an outlet on the boat that can be controlled by our iPhone, or other smart phone. I figured I'd plug our dehumidifier into the smart plug so we could monitor it from home and know if the power went out at the dock. It's good to know if your batteries are not being charged like they are supposed to be. I like power at the boat at all times, because RAIN (or leaking shaft seals)-ALLOWING WATER INTO BOAT WITH DEAD BATTERIES=NO ABILITY FOR BILGE PUMP TO OPERATE=SUNK BOAT. The previous equation is pretty much foolproof. Did you know the leading cause of boats sinking are leaking shaft seals?
But my brain storm hasn't lead to a solution yet, because the wifi at our marina is abysmal. The smart plug cannot stay connected to the poor wifi. I may try using a signal repeater, but even the smart plug manufacturer states that the plug is not effective in a wifi system that requires a "code" to be unlocked to use it. This has me a bit puzzled, as even our home router requires a passcode to access the internet. If anyone has any ideas, I'd be glad to try them and pass them along. Meanwhile, we'll use the smart plug at home so we can turn the T.V. on from the boat. Why I want to do this, I have no idea.
Another thing we've been dealing with for several years is keeping running lights on the dinghy. I'm not sure how many sets of battery powered stern and bow lights we've purchased from Amazon, Defender, or the local marine supplier, but I finally got tired of the sun eating these things up, and the rain getting into them despite O-rings on the caps. 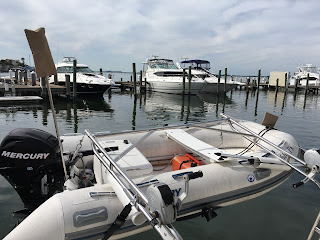 I asked my favorite canvas guy to make us some "envelopes" from Sunbrella material to place over the lights when they are not in use, which is most of the time. They are both the same size, but the stern light has the opening at one small end, and the bow light has the opening along the long end at the bottom. Velcro along each opening allows the covers to close pretty tightly along the seal. Since the seals are at the "bottom" of each opening, the lights will stay dry and will be impervious to the sun. Yes, we could stow the lights in the storage compartment on the dinghy, but both the forward locker in the dinghy, as well as the Igloo cooler we use for life jackets, spare fuel, and a small tool kit, also get water inside. For about a second, I did consider using those small bags that people use for pet waste. They are abundant around most marinas these days, or at city parks, but honestly we didn't want to pull up at a dinghy dock and have someone mistake us for sailboaters. (Oh, come on! You know that's funny.)  Do what you want, but I like our new covers.
Recently we asked some friends of ours, who we met in Marathon and who now have their boat at the Clearwater Beach Marina, to join us for an overnight on the hook at Three Rookers Bar, a nice anchorage near Dunedin, but also fairly close to them too. They had to decline because they now have a large puppy who needs to be walked twice a day and their dinghy has been on the bow of their boat since they left Marathon back in September. Do you see at least two things going on here that are in opposition to our thoughts on both dogs and dinghies?
One, we obtained our small dog for a reason, so that we wouldn't be a slave to nature and need to walk Holly for her to use the "bathroom". Two, we tell everyone that a dinghy is no good if you can't deploy it readily. We went by their marina to say hello, but after a couple of hours, we casted off and went to our anchorage as we originally intended. If other folks want their lives to be complicated, that's their business, but we can't let it affect us.
Which brings me to a point...we don't "buddy up" on any crossings with anyone, much less strangers. We see countless posts on the AGLCA website and other places, about people in transit requesting a "buddy boat" so they can all travel along together in a convoy. We have enough to keep our hands full making sure our boat is travel worthy. I don't want to take on the added responsibility of someone else's boat who may not be as particular about how they do things. We'll be glad to meet someone where we are going, but I don't want anyone worrying about us, and I sure as heck don't want to be worried about us and anyone else. 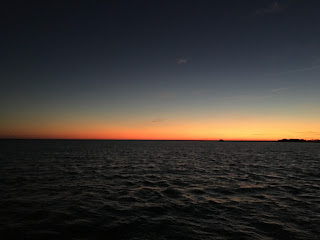 So this attitude means we spend a lot of time on the hook, alone. Pity. On the evening pictured in the photo, we were on the hook at Three Rookers Bar as the sun went down over the Gulf of Mexico. We had just grilled some steaks and were finishing up a bottle of wine to have with our dinner. We hadn't spent a night on the hook since New Years Eve, and we were long overdue. We stayed out even though the wind forecast was a bit on the sporty side, and we bounced around more than we like, but we didn't have to listen to any complaints from anyone the next morning about the choices we'd made concerning staying on the hook for the night. The topper the next morning was the hot coffee and steak and eggs we had for breakfast at daybreak, also not having to wait for someone else to get out of bed to join us.
Call us independent. I consider it a compliment.
Another compliment was one we received the other day from a long time blog reader who we ran into at our new home. He was telling me that their boat is at a marina in Stewart, Florida, and he in turn met a boat neighbor who started following this blog and winded up buying a boat just like Swing Set, due to the success we apparently had been having with our Sea Ray. Maybe he hasn't been reading this blog as carefully as he should have, but still I feel a little pride in the fact that somebody thinks we are doing it right.
Send me a note, whoever you are.
Posted by Swing Set at 10:01 AM 1 comment: