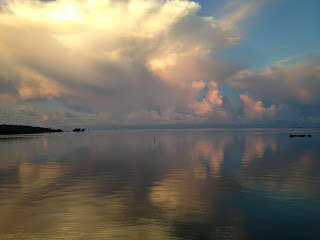 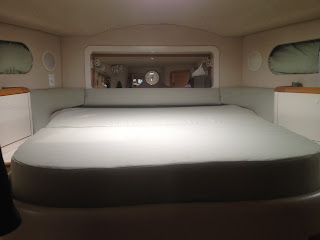 Yesterday we installed our new headboard and mattress. We picked a neutral colored green for it all. This picture is before Rosie made up the bed with a mattress pad, sheets, bedspread, and pillows. Since we went with an eight inch mattress, the added height allowed Oceanside to increase the width of the bed at the head. Instead of the original trapezoidal shape of our old bed, we now have something more of a square. It's geometry. I hardly understand it myself.
Last night was our first time sleeping with the new mattress, and it's as firm as we wanted it, and we like it.
People like to say that we are "living the dream". If this is true, we may never want to wake up.
Posted by Swing Set at 8:14 AM No comments: