Is The Grass Greener Over There? 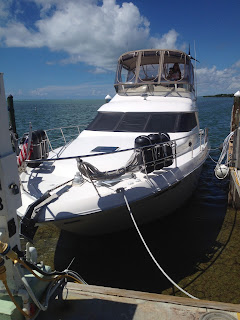 As you can see in the picture, our view from the stern of Swing Set is a pretty good one. We like our marina, we like our boat neighbors, and we like the area in general. It must be time to move on.
In my last post it wasn't hard to sense some disappointment in the fact that we've had to have our boat bottom painted for the fourth time since the year we left St. Louis. Seems like so long ago but it was only three and a half years. But at an average of $4000 per bottom job, it means a big hunk taken out of our budget. It's time to tighten our belts some and the easiest way to do it is to find a place with cheaper rent. Good bye Florida Keys.
Nothing is set in stone, but in a couple of weeks we're taking a drive up north for some recon. I've done some phone inquiries, searched through Active Captain, and looked online at some dock finding websites, and with hardly no trouble at all we can reduce our rent by over 50%. Yes, it means getting into parts of this state that may get cooler in the winter, but with cheaper rent we can afford to fire up the Cats and head south if a cold front rolls in. What we love best about living on a boat is the ability to change our scenery if we want without too much trouble. No sense living this lifestyle if we're afraid to move because we may not have a slip to come back to if we take a trip.
On the subject of taking a trip; we've just returned from a month in Key West. We had to not only pay double what we pay now for a slip in Key West Bight, we had to pay for our slip here at Marathon Marina while we were gone in order to have a slip to return to as the waiting list for slips for boats our size are at a premium this time of year.
Like I said, we've just returned yesterday, but you can't return until you go, so let me start at the beginning: We pulled out of Marathon of October 24th and with a following sea we headed west, wallowing through the waves at our regular displacement speed of 8.5 M.P.H., so I put Swing Set on plane, adjusted the tabs, and ran the whole 40 miles to Key West at the published cruising speed of our vessel, which is 25 M.P.H. at 2500 R.P.M.s, without a glitch of high temperature issue. Yippee!
We pulled into our slip at A & B Marina in a tad over two hours. We did something a bit different this time at A & B by pulling into the slip bow first. We used a provided set of steps to exit the boat from the very bow, which wasn't any harder than ducking under the dinghy on the stern via the swim platform like we used to at A & B because they have no finger piers. We think if worked out pretty good for us, plus Holly didn't feel a need to bark at every soul who walked past our boat, which seemed to happen about a million times per day.
This blog isn't about our exploits when we're in port, and this may come at a disappointment to those who want to see pictures of our week in Key West during Fantasy Fest, but we're keeping those details to ourselves for now. I will say that the best time we had in the last month was when we took some friends out for a cruise while we were there. All of our guests were boaters, and everyone helped and didn't cause us any grief.
With nine persons on board, Swing Set ran us home from the upper end of the Northwest Channel of Key West at cruising speed, albeit with a bit of a throttle lag when I first poured on the coals.
We spent four weeks in Key West going to Dante's, bars and restaurants, blah blah blah.
The weather proved to be worsening, so we left Key West a few days early to take advantage of a light wind on the bow and minimal seas as we made our way back east to Marathon. Today would have meant beam seas, and if we waited until Sunday, we might have just been stuck for another week. No thanks. Another couple of days and I may have gone over and shot the singer they had over at Schooner's Wharf in the afternoons.
I think we've had enough of Key West to last us a few years. By the time we go back, we'll need to be able to speak fluent Russian to buy a t-shirt on Duval Street. Spasibo tovarishchu.

People who read this blog remark on how much they learn from reading it, and mostly I think
it's because I don't have a problem sharing when it comes to my ability, or failures, at fixing
the ongoing mechanical issues that pop up. We did have one such issue while in Key West.
We have been keeping our shore water hooked up to our plumbing while in Marathon, but in
Key West we had to keep our water tank full and use the fresh water pumps to have water.
This requires monitoring our water supply and I apparently had other things on mind during
Fantasy Fest and I let our tank run dry. This adversely affected one of our fresh water pumps
to the point of it needing to be replaced, so I popped in a spare pump that I had on hand but
a small leak was coming from the pressure switch. There was a good chance that just
tightening up the screws on the switch assembly would have fixed the leak, but I had already
installed the pump and tightening up the screws required removing the pump again, so I
ordered a new pump to match the other new one that was installed last fall. I like things to
match.
The new pump came and I pulled out the spare I had put in and in fact found out that the switch
assembly was indeed loose. (From when I "fixed" the switch after installing a new pump last fall)
I installed the new pump anyway and sent the old one to the spare parts department again.
The new pump wouldn't turn off, so I consulted the manual and adjusted the switch by backing
off the adjustment screw just a smidgen. All was fine, but the new pump kept cycling on every
few minutes, much to my perplexity.
I checked all the fittings and faucets and was left to wonder if the switch on the new pump was
bad. I decided to sleep on it.
That night I woke up to find the air conditioner in the master stateroom had quit working. The
unit in the salon was still working, so I figured the filter in the master stateroom unit needed
the air filter changed. In the morning the salon unit had kicked out on low pressure too, so this
usually means that the water strainer is clogged. Down into the engine room I went to check on
the sea strainer which I found to be free of debris.
It was time to get serious, but first I had to wash the sleep from my eyes, so I went to turn on the
water and found out that the water tank was dry. Hmmm. The new water pump was cycling on with
no sign of a water leak, and the air conditioners were both kicked out on low pressure. Somehow
the A/C units lost their prime when the water ran out on our house water supply. I went back into
the engine room and with dry hands I again tried to tighten the faucet in the engine room
and found that it wasn't turned off all the way. The light bulb had finally come on.
When I flushed the engines after the outing with our friends, I hadn't turned off the water all the
way, so when I installed the new pump, I had water leaking through the shared hose supplying
fresh water to our A/C units for when I flush them. The leak wasn't detected because the fresh
water was just going out through the raw water intake for the A/C units. All was good until the
water tank finally ran dry, so this caused an airlock in the A/C water pump which kicked out both
A/C units.
One little oversight caused all these problems, but I'd rather have simple solutions to
complex problems rather than have complicated solutions to simple problems. 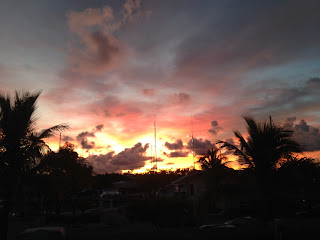 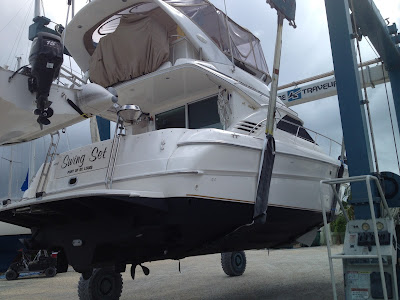