A few weeks ago we decided to take Swing Set out for a mini-cruise, not sure really where we wanted to go, but headed south on St. Joseph's Bay to see where we would wind up.
The wind was up a little on the "outside", so we stayed in the Intercostal and just glided along at our slow trawler speed of 8-9 miles per hour, sight seeing again the area from Clearwater down to Tampa Bay. We hadn't been on this route since first coming through it in 2012.
We crossed the mouth of Tampa Bay towards Passage Key, a small island just off the northern end of Anna Maria Island. We anchored out to watch the sunset, but as it got closer to evening I decided to pull up anchor and find another anchorage a little more out of the wind. It was at this point that our windlass quit.
Recently, the rocker switch for our engine sync had been acting up, and the switch for the windlass seemed to be acting intermittently as well, so I ordered two switches from Morgan at Marine Max at Lake of the Ozarks. You might wonder why I order parts from a Sea Ray dealer way up in Missouri, but a lot of parts are that we need for a 20 year old boat are not kept in stock, they're special ordered from Sea Ray and drop shipped to wherever they're needed anyway. When I call Morgan, he knows us and has never failed to deliver. 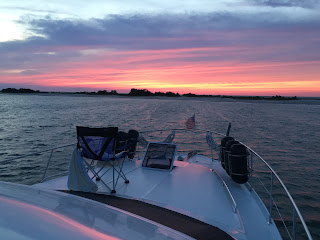 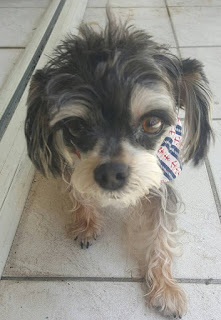 We get notes from blog readers who remark to us about Holly, so I don't mind keeping those folks informed about our little buddy. In a week, Holly is going in for surgery to repair some torn tendons in her left knee, as well as repairing one of the patella laxations that she has on both hind legs. (This means her kneecaps rotate off the front of her knees.) If this surgery goes well, we'll plan on another surgery on her right knee so that she can return to taking long walks with us and running up and down the stairs on the boat and at home. We knew this day would come at some point and it's best for her recovery to get it done while she is young. She'll have to stay overnight at the "hospital" and we're not looking forward to it. I hope she doesn't hold it against us.
Posted by Swing Set at 7:31 AM 2 comments: