Everyone we talk to around here in Key West that has been here a while says that it's unusually hot this year. The median high for Key West is 90 degrees, and the highs have hit that several times in the last few weeks, but those highs usually don't occur until August. 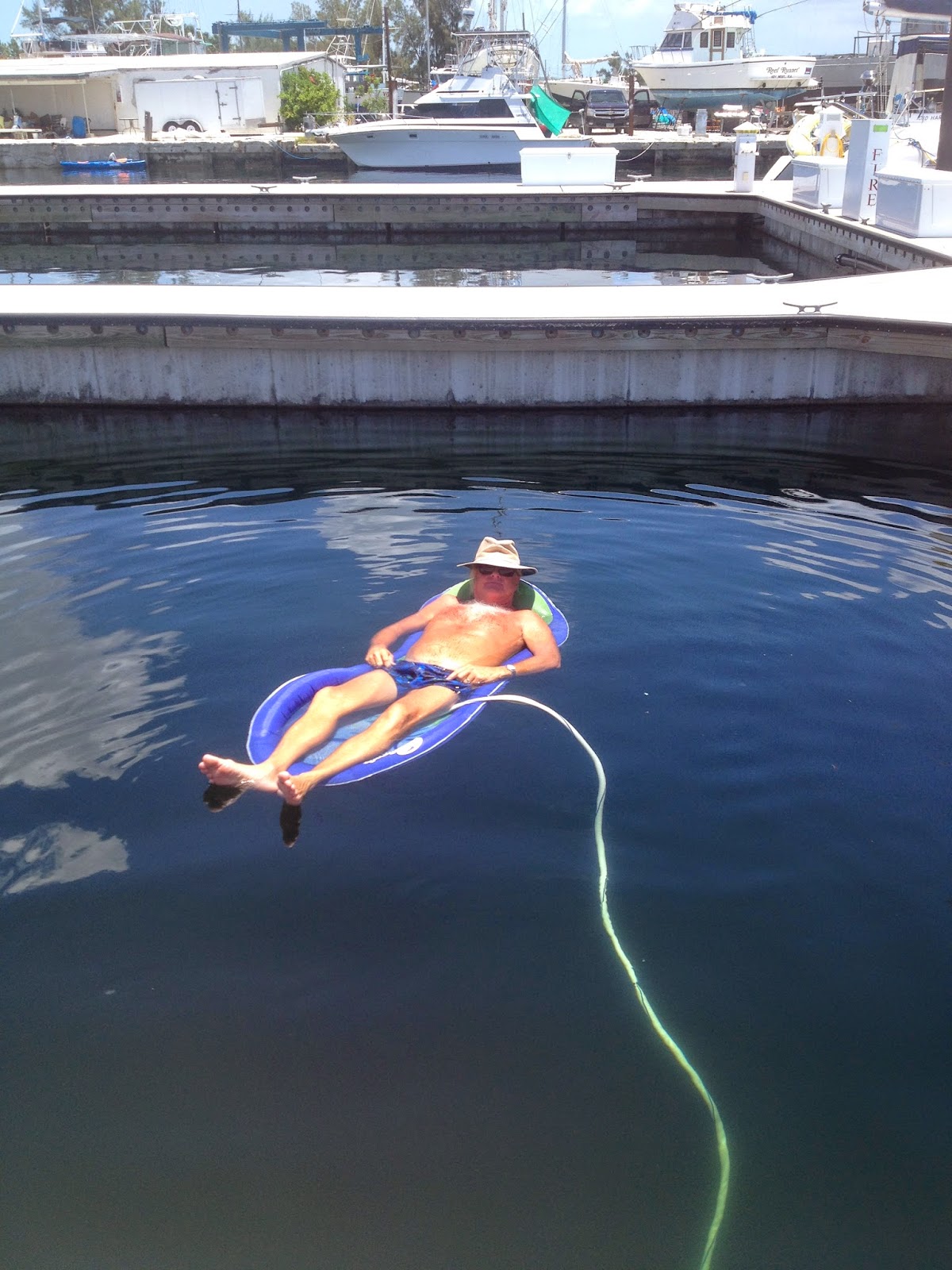 Our marina doesn't have a pool, but they've roped off an area in a slip near the ship's store to be used as a "swimmin' hole", but in the photo, I'm laying on a raft in our own slip, something we do when we don't take out the boat or the dinghy. I use the hose to jet myself around in the slip. No need to paddle.
We've been taking Swing Set out at least once a week to keep the cobwebs out. On our last outing, we cruised up to Newfound Harbor and dropped the dinghy to mingle with all the other boaters at Picnic Island. 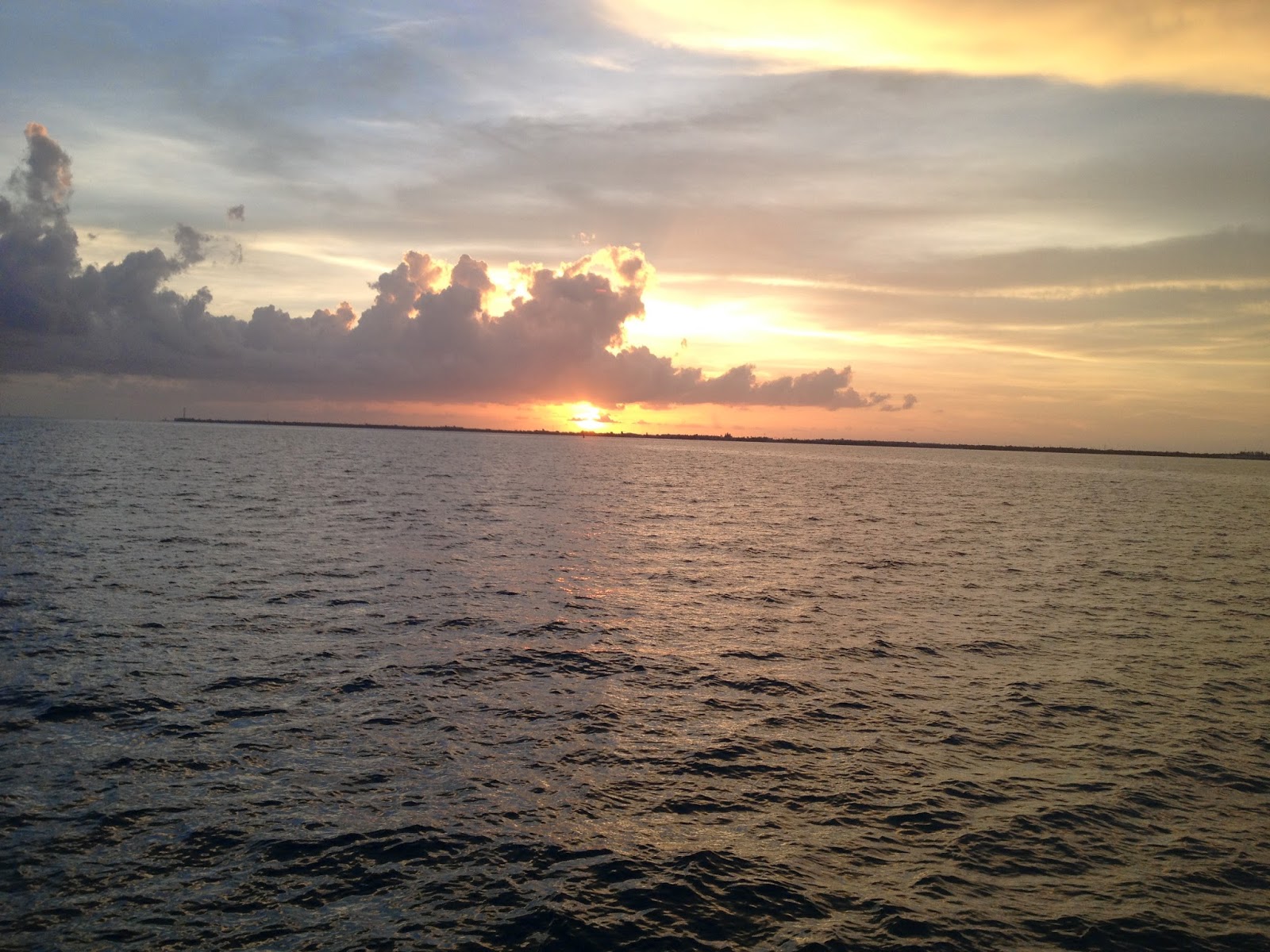 It was roughly a fifty mile round trip and we didn't get back to Stock Island until after dark, but we were treated to a nice sunset on the way back.
The boat ran good, although the engine temperatures are still running on the high side, but I think I have a handle on it, knowing a better way to clean the heat exchangers next time.
Meanwhile, the engines get flushed with fresh water when we return from running them, so buildup on the heat exchangers should be minimal.
Last week, one of our boat neighbors took us out on his Boston Whaler for some fishing. We went out about ten miles directly south of Safe Harbor, getting into some 1000 foot deep blue Atlantic Ocean water, where we cruised the giant seagrass beds, trolling for whatever we could find feeding under them.
We don't fish much, as you know from reading this blog, so anything we caught was exciting to us. We were using three rods with plugs, or artificial lures, each with line let out at different lengths.
Our neighbor, Joey, wasn't too impressed with our catches, but we did catch two dolphin, two bonita, a jack, a snapper, and one other little fish we cut up for bait. Nothing was big enough for us to keep for eating though.
We were about to give up and head for port when we got a strike and Rosie started reeling in the fish. She was having trouble getting the fish in, saying it was awfully hard, but I was attributing that to the fact that she was holding the rod handle under her arm instead of against her hip. Rosie ran out of gas as the fish came nearer to the boat and then she handed me the rod.
Holy Mackeral, and I mean it. It took me and our neighbor Joey two tries with the gaff to get a good sized King Mackeral into the ice chest, and not because it was so big, I had just never gaffed a fish before, nor had caught one even as big as it was. 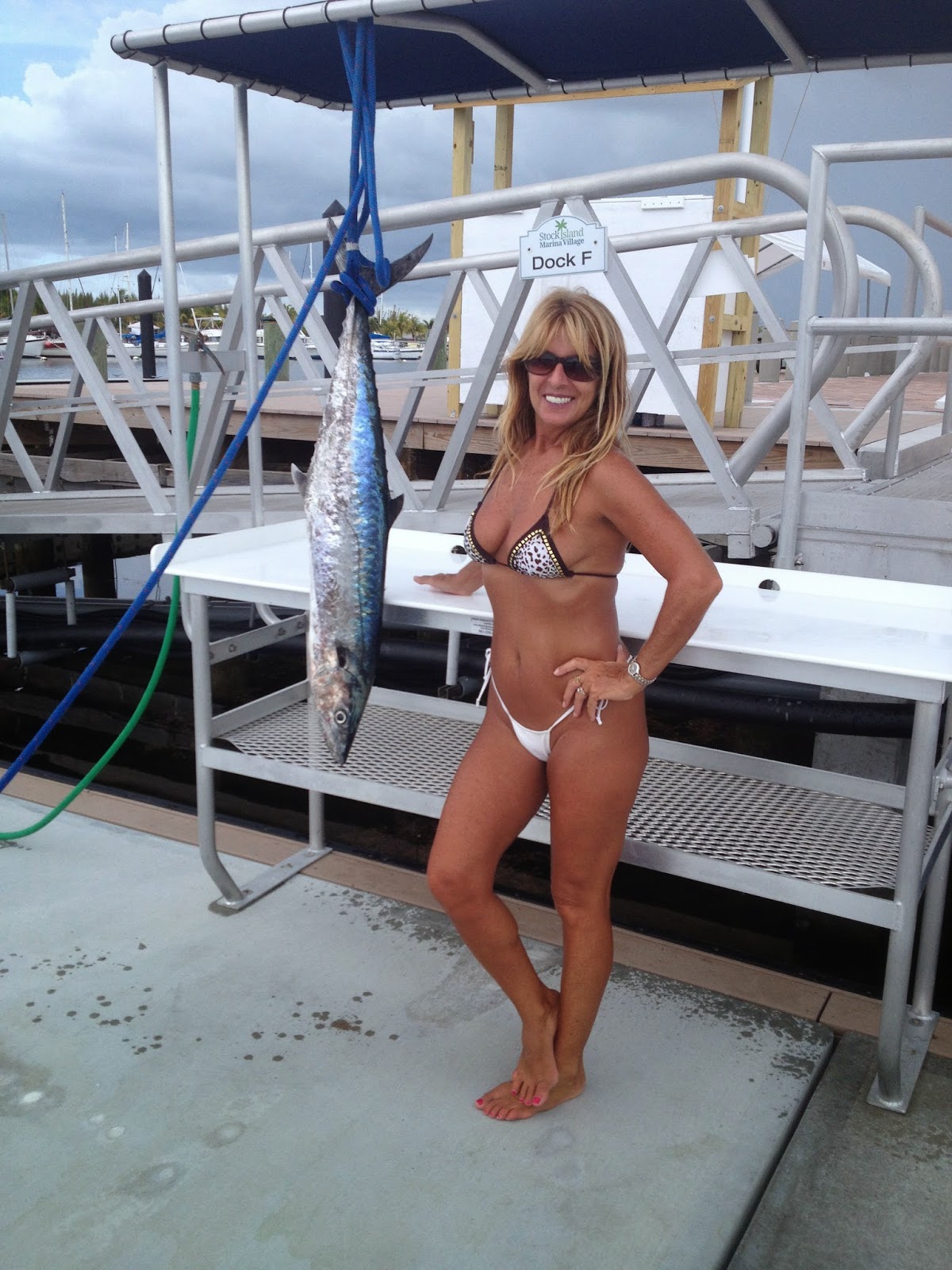 A squall was rolling in, so we headed to the barn with our fish in the ice chest. We hung it from the fishing cleaning station at the gas dock for the photo above, just like the big game fishermen that we are.
It was only 20 pounds, but we yielded probably ten pounds of some nice eating fish. Joey only wanted a few filets, and we gave some other neighbors a couple filets, and we got to keep the rest.  The pink meat cooked up to a flaky white and was even more tasty than the last swordfish we cooked.
Last Friday we put Holly in her carrier and we buzzed up to Geiger Key on the Zuma. We had a late lunch and did some sight seeing on the way back. 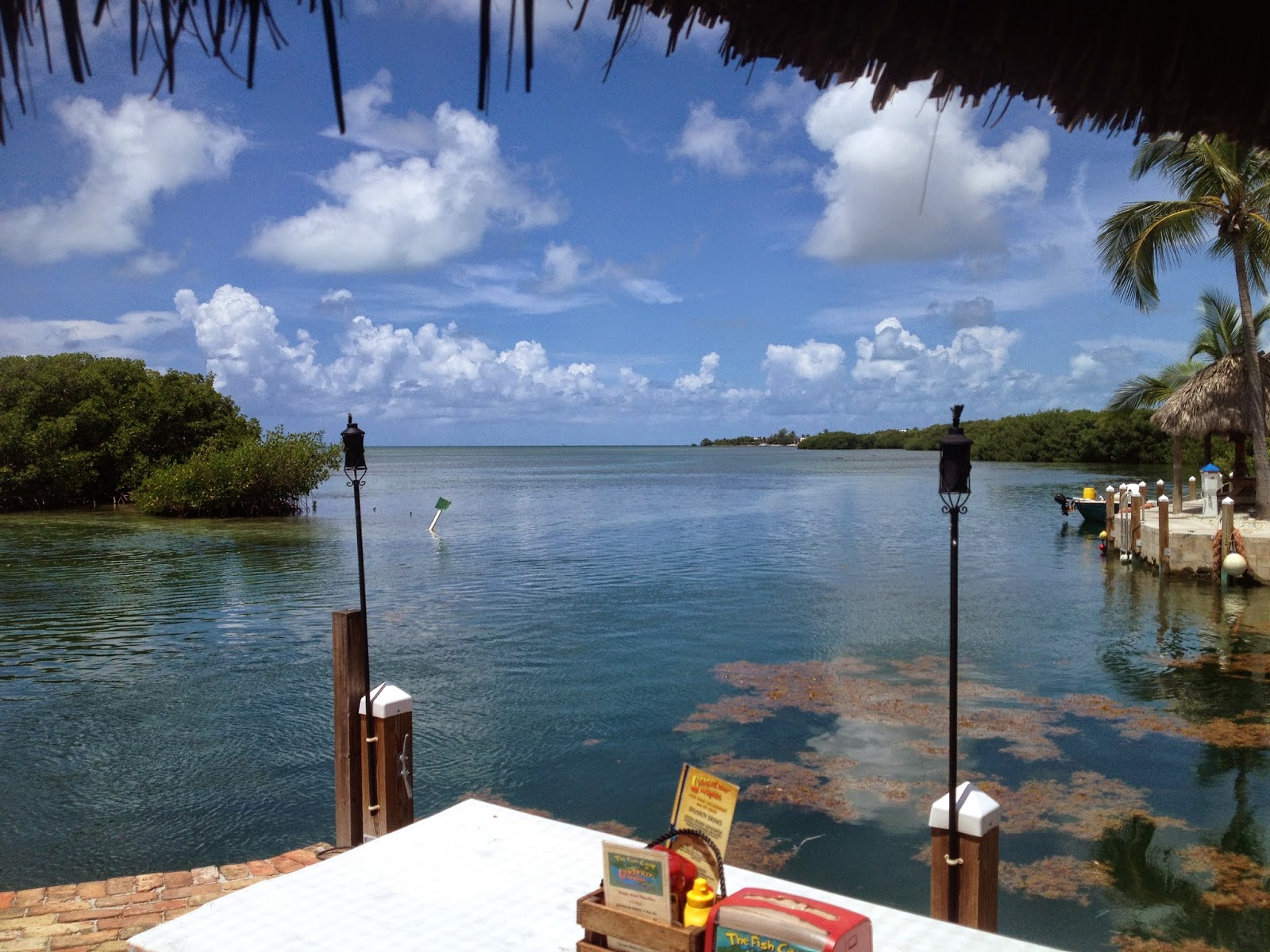 The view from the Gieger Key Marina Tiki Bar is a nice one, and it's a good place to go for a quiet dinner or lunch. The owner also owns Hogfish and Roostica, two of our other favorite restaurants on Stock Island. 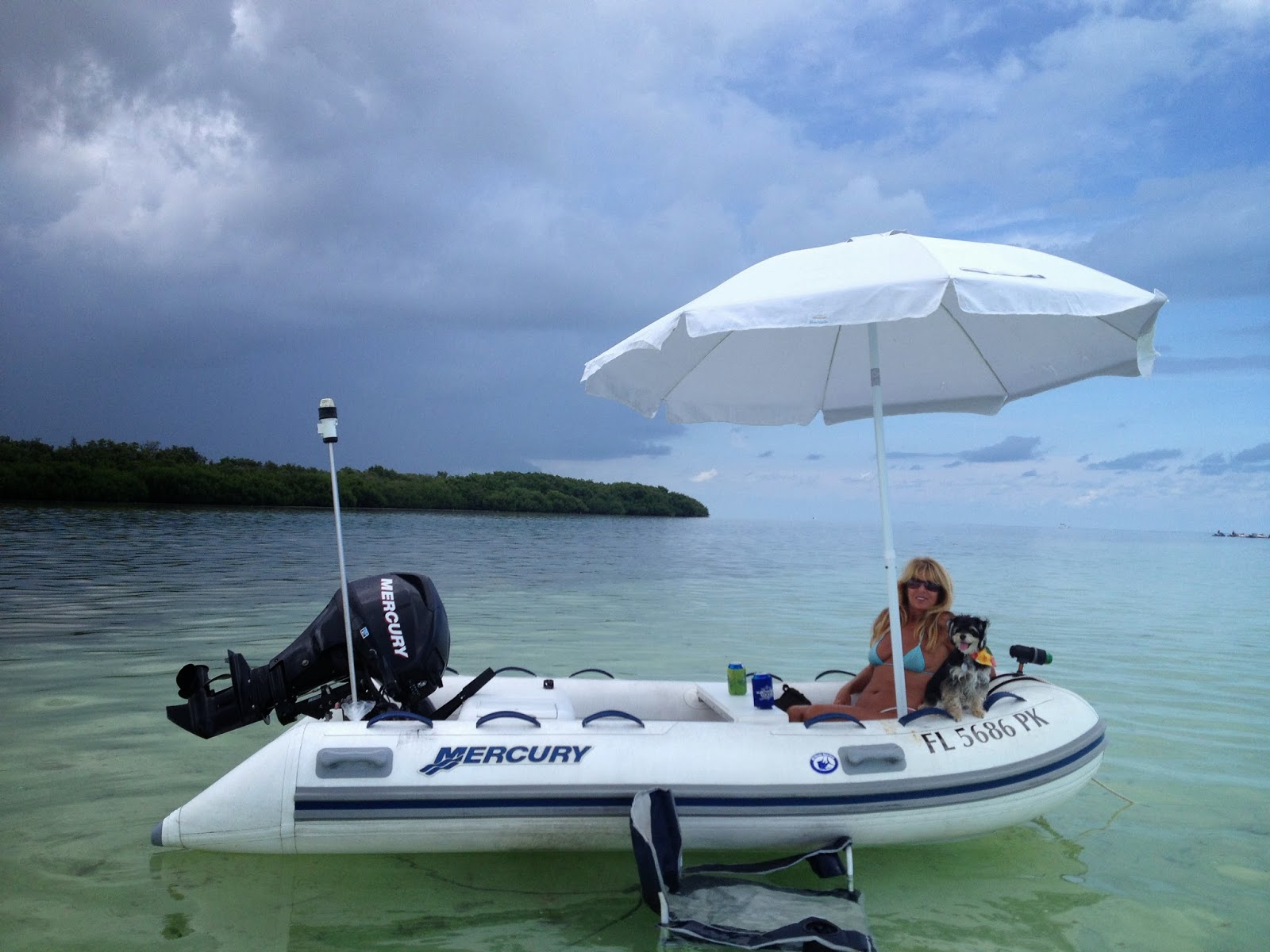 Yesterday we loaded up the dinghy and took it out to the Boca Chica sandbar where we were met by some other new friends who brought their dinghies over too. They ran for cover later in the afternoon when the rain clouds starting rolling in, but we stayed until the rain began to fall, then high- tailed it into the harbor and headed straight for the aforementioned Hogfish Bar for an early dinner. 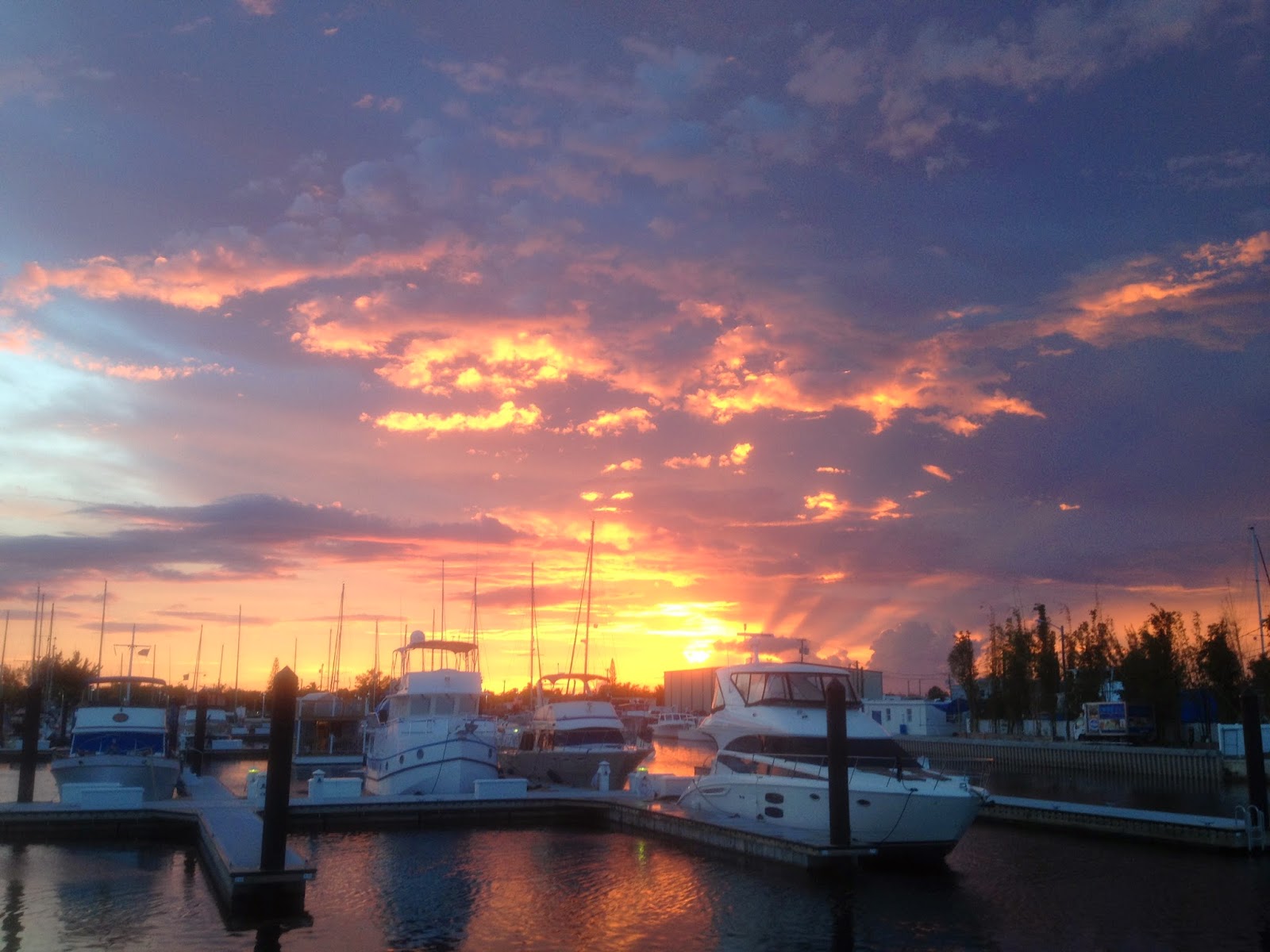 A late afternoon rain will usually give way to some beautiful sunsets, and yesterday was no exception. We like the sunsets we can see from out at sea, but ones like this from the deck of Swing Set in our slip are pretty nice too.
Posted by Swing Set at 11:43 AM 1 comment: