Another Phase Of Our Lives

Readers of my earlier posts may remember me telling about our time living on the Meramec River on the outskirts of St. Louis, MO. I told about our first home there and the floods we experienced in that house, and also the floods we endured while living in my parent's old house, after we eventually bought it from them, just up the street. We moved away from the river late in 1999 but those homes have always been on our minds and we kept tabs on both of them. 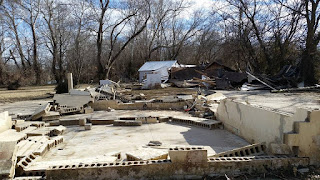