Our trip to the dermatologist was fairly uneventful last week. The doctor asked us if she could spare us the lecture about all the exposure that we were getting from the sun, and we told her that she could, we've heard it before. We promised to return in at least a year and out the door we went.
I didn't know until yesterday how much fuel we used on our Boca Grande run weekend before last, but it turns out we only burned 2.6 gallons, in what I figure to be a 30+ mile ride, at wide open throttle. We carry six gallons in our fuel tank, and another 2 gallons in a gas can under the seat. Next time we might just run all the way to The Marquesas. 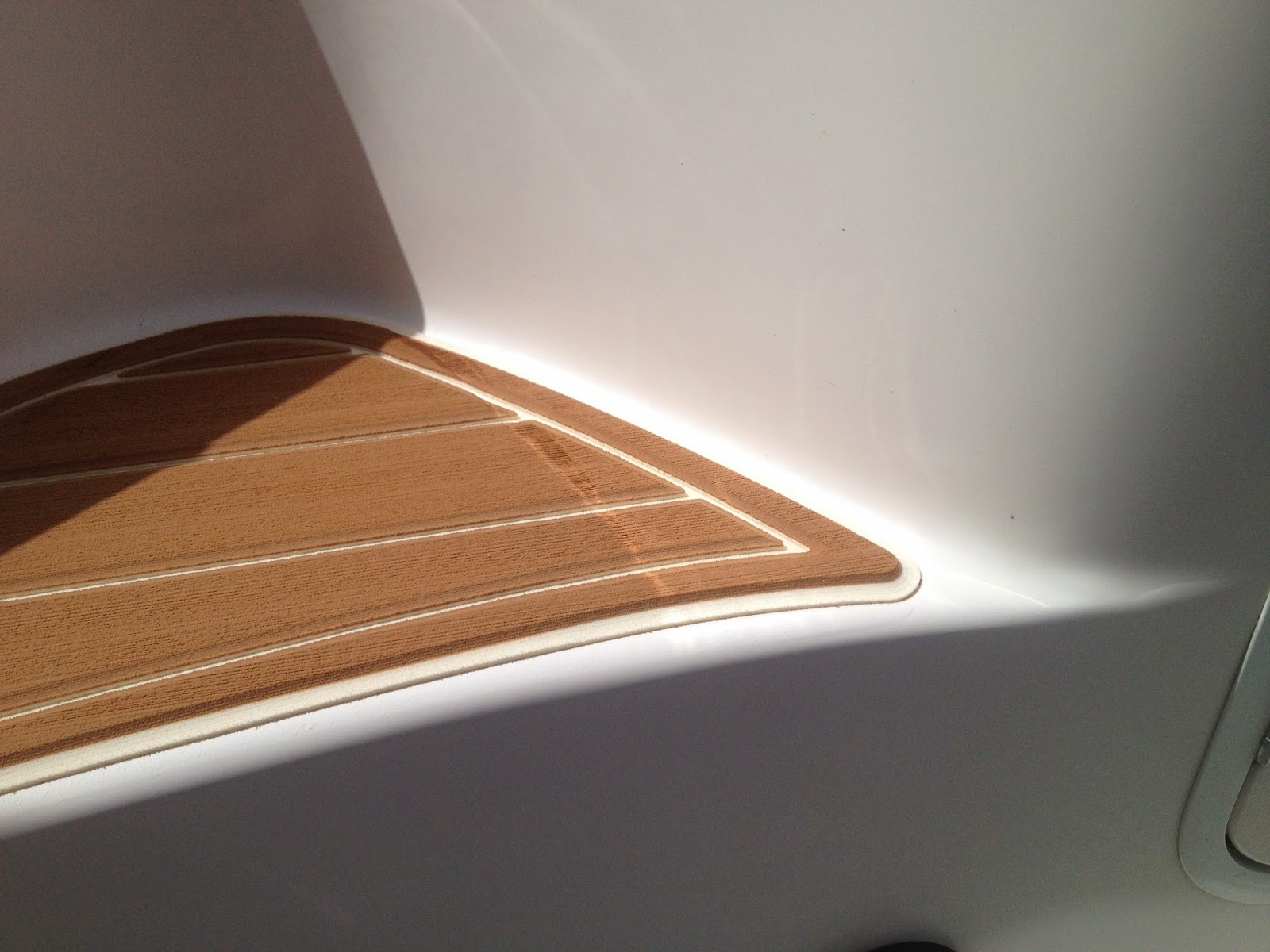 Here's a photo of one of our SeaDek pads. You might be able to see how shiny the surrounding fiberglass is, and you might be able to see a burn mark, or "scar" on the right side of the pad. In less than one week of sun exposure, the pad was affected by the hot rays of the sun.
I contacted both Tyler Shealy of Castaway Customs, and SeaDek, and was pretty much told that this was typical when the rays of the sun are reflected off of nearby surfaces. They "melt" the SeaDek material.
It was suggested that we; cover any surrounding stainless steel with white tape to cut down on glare, put some plastic film on the surrounding fiberglass to minimize glare, or to have some protective covers made for the steps when they are not in use. You will not find any of these informative details in any of their literature. My call this morning to Customer Service was routed to voicemail.
I was also told that Flexiteek would be hotter to stand on. That's fine. My response was that we could wear shoes, or sit on a towel. Nothing made for a boat should be ruined this quickly due to sun exposure. We bought SeaDek for cosmetic reasons, so it would make the boat look good. Maybe I'm waxing the boat too much. 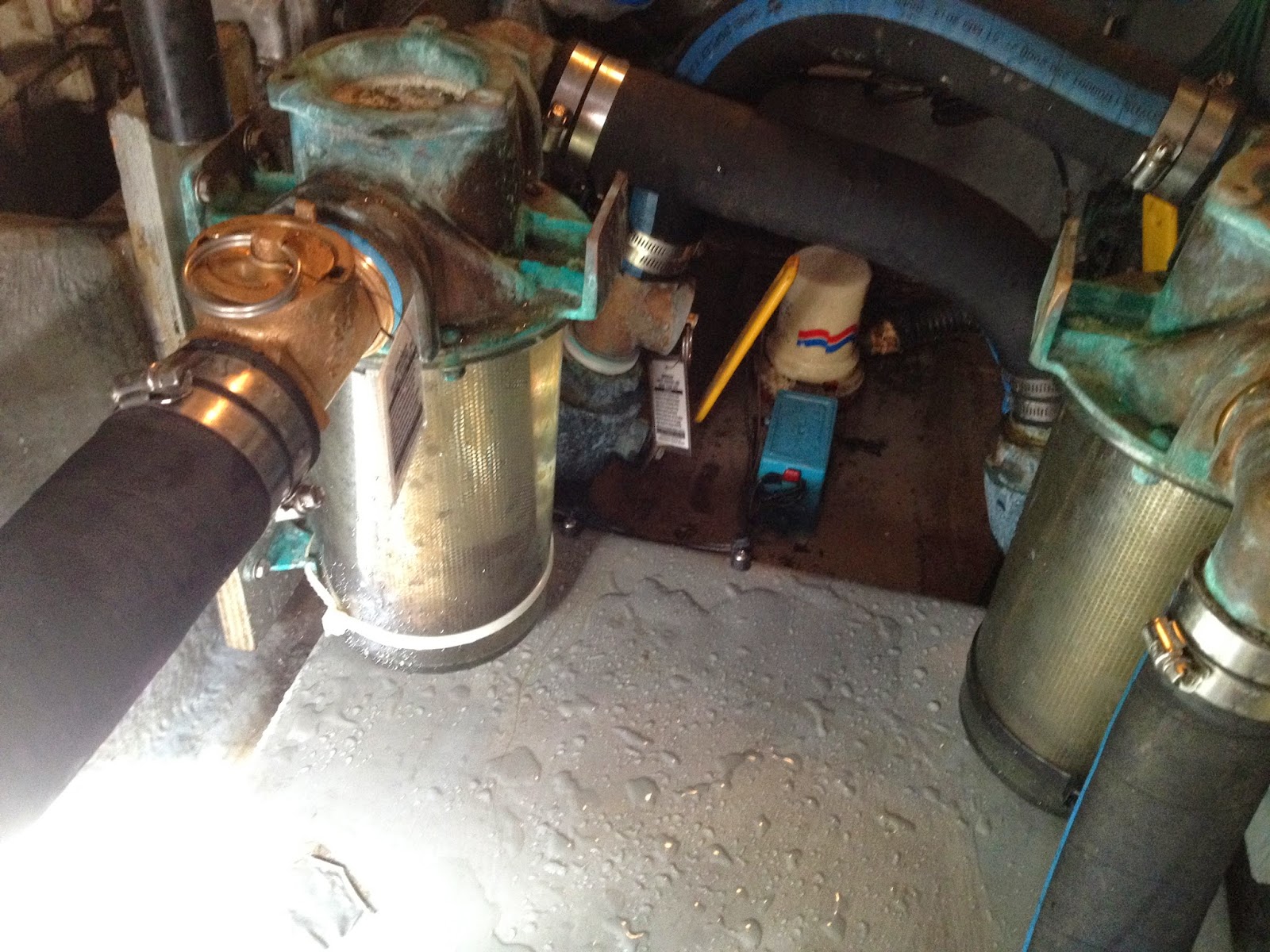 I installed flush kits on three of our Groco sea strainers. The strainers in the photo are for our main engines, and I have one strainer mounted at the seacock, and one after the strainer, both acceptable locations. I used two different methods because of the raw water hose routing. The seacock location allows one to remove the plug (after closing the seacock) and pump water from the bilge using a main engine if it is ever needed to do so. I sincerely hope it never comes to that.
The main reason for purchasing the kits was so I could pickle the engines and generator with fresh dockside water after running them, so creepy sea life critters can't grow in them while we're just sitting at the dock, extending the interval for cleaning the heat exchangers.
I did clean the heat exchangers on both engines, and our new generator last week. Every time I do this job I learn something new. This time I learned that I need to bypass the raw water pumps when I circulate the Barnacle Buster because the pumps impede the flow of the cleaning agent. We did see improvement in heat transfer after cleaning the heat exchangers, but next time I'll do a better job and expect better results.
One thing I did after cleaning the heat exchanger on the generator was to run Barnacle Buster into the water intake of our air conditioners, and then let it sit for about four hours. Our air conditioner performance improved, even though I had seen no indication of poor water flow previously, but I'm sure we would have in time.
Even in this hot weather, our cabin temperatures decreased to the point where we could increase our thermostat settings by two degrees, an indication that the units are now running more efficiently. 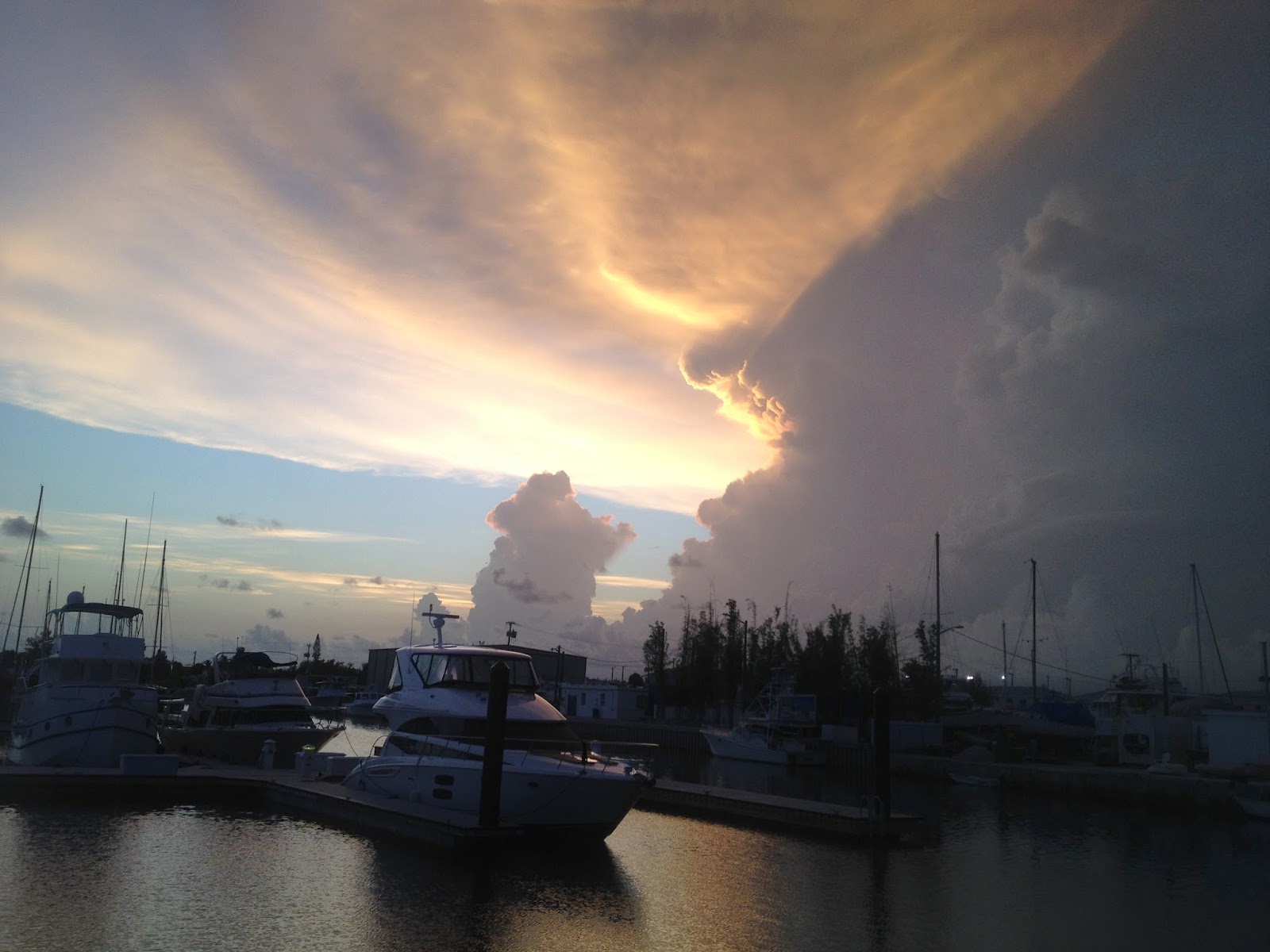 The hot weather has brought a chance of rain nearly every day. This big cloud rolled in at sunset last week and it rained all night. 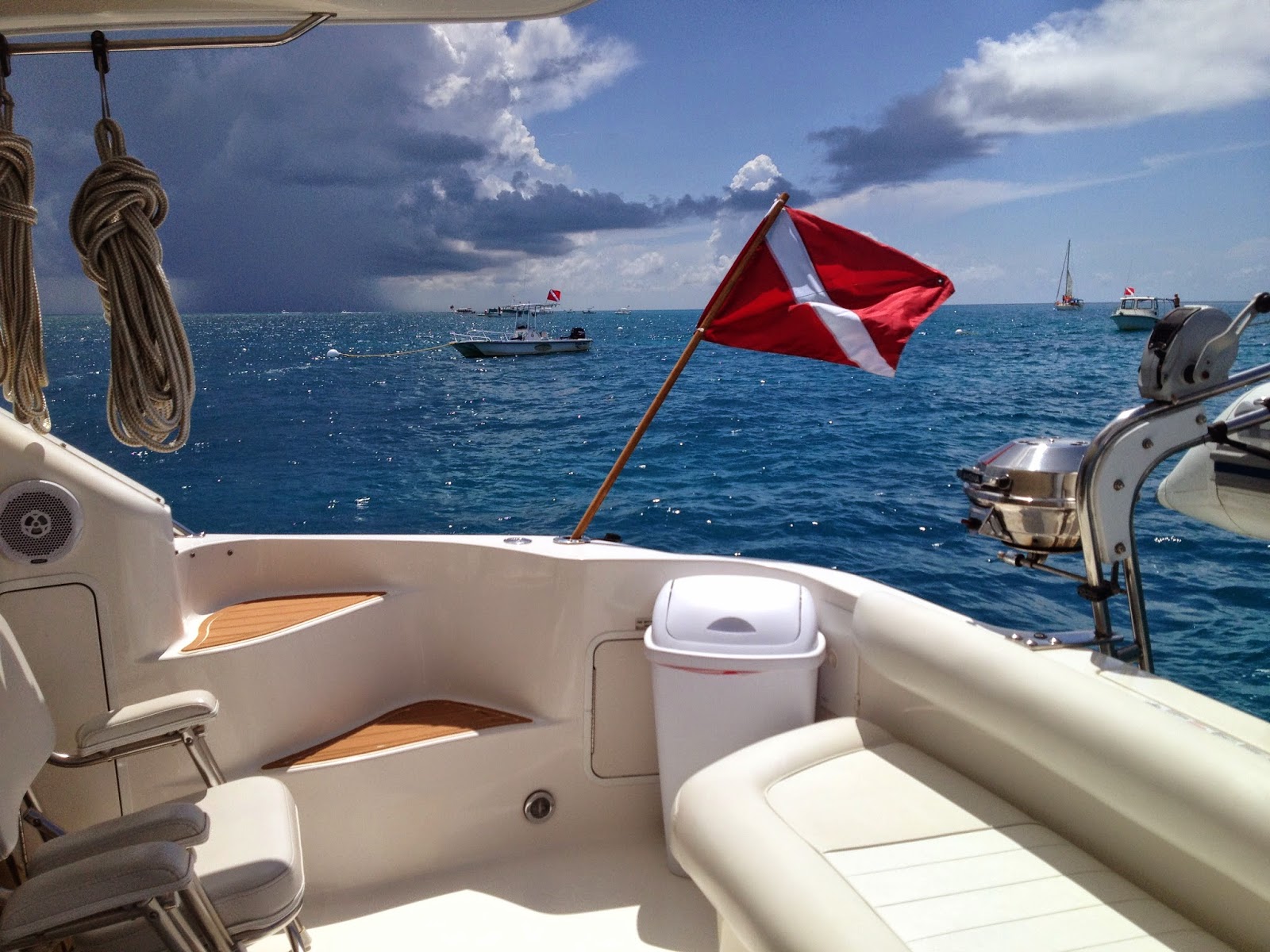 This last Saturday we wanted to test the performance of our engines after cleaning the heat exchangers, plus I have vowed to take Swing Set out at least once a week to run engines, and help keep growth off of the hull.
We headed to Newfound Harbor, about 20 miles east, but a big rain cloud formed over the Keys, so we veered out to Looe Key, a popular dive and snorkeling spot just off of Little Palm  Island, but the rain cloud followed us out there.
I snorkeled for about a minute, but gave it up because I'm spoiled by the clear water in The Bahamas. We were also in about 18 feet of water and there wasn't much to see. We got there too late to grab a mooring in shallower water.
Once the rain moved out, we motored in to Newfound Harbor and anchored just off of Picnic Island for the afternoon. Picnic Island is a place we are familiar with, and we'll probably make the trip on a more frequent basis, as the island is a popular gathering spot for the locals of BIg Pine and LIttle Torch Key, among others. We wound up cruising over fifty five miles that day.
On Sunday morning we topped of the dinghy fuel tank for a day trip. I wanted to go back out to Boca Grande, but Rosie didn't want to go that far. We probably did wind up going just as far, but we did it in increments.
First we buzzed by our regular haunt, Boca Chica sandbar. It was too early for many folks to be out, but we did see one couple we'd met before. They were very nice, but I remembered that he wouldn't let anyone get a word in edgewise last time. We decided to just wave hello this time around and save an afternoon with this couple when we don't have much to talk about.
Then we headed north, crossing under the bridge at the Boca Chica Channel, and set a course for Snipes Point. 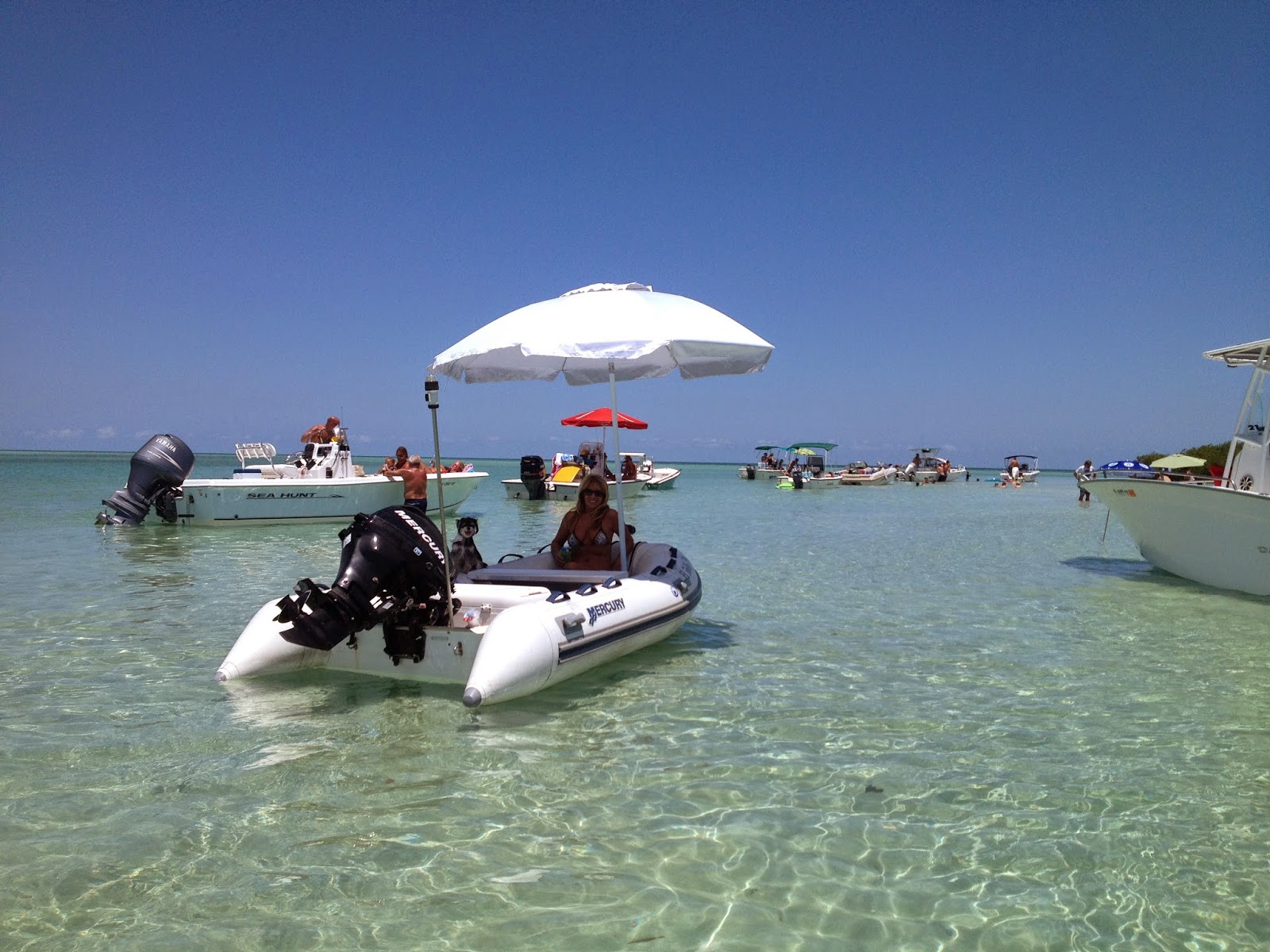 Boats were gathering already at Snipes, but we kept going and for the first time, went a bit further and pulled up at Marvin Key, another popular hangout frequented by a lot of folks from Cudjoe Key and surrounding areas. We liked Marvin Key better than Snipes Point because you don't get waves rolling in from the Gulf as the beach is better protected by reefs, and as you can see, the water is pretty clear too.
We had a good time there, but after a couple of hours, we went back to Snipes, which was chock full of boaters out for the day. We ran into some folks who usually frequent Boca Chica sandbar, but like us, were taking advantage of the calm conditions to run out to the areas that are a pain to travel to when the wind kicks up.
We know we are making progress as "locals" when we start seeing people on the beaches on a regular basis, and we really know we are making progress when we are seeing people we want to avoid.
We were bushed by the time we got back to the marina, and even though we both wanted to pop into Hogfish for dinner, we were just too hot and tired to bother. We had a good dinner of leftover tortellini and salad after refreshing showers. It was just plan nice to be sitting in the air conditioning!
After dinner we put a movie in the DVD player and I didn't get past the opening credits before I was snoring away. (According to Rosie anyway.) 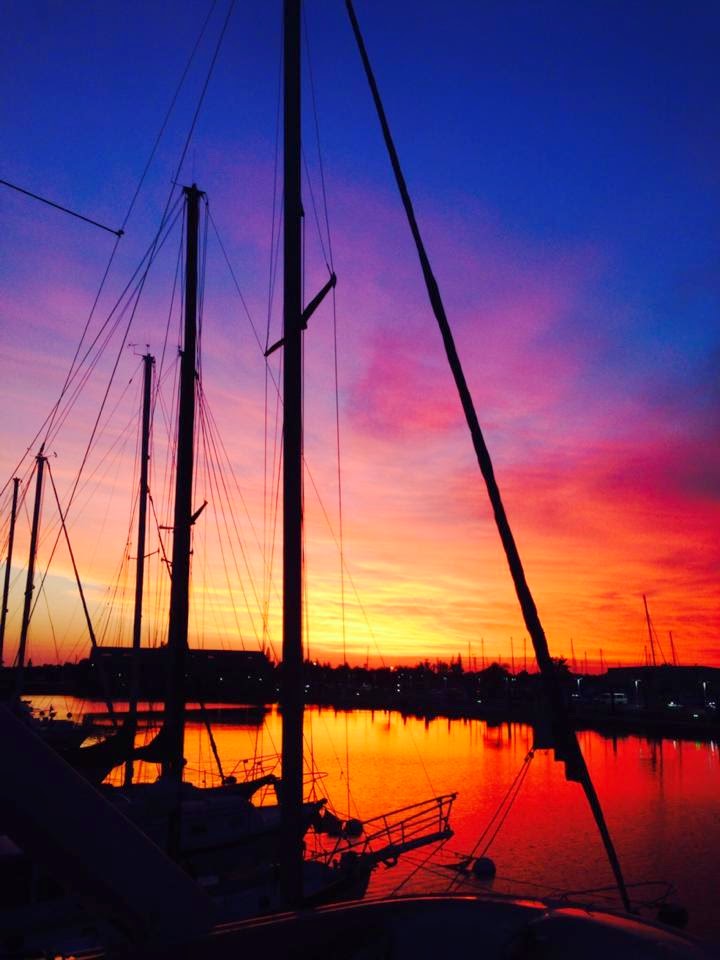 But look at this sunset we missed! One of our boat neighbors took this shot last night, and also of another one of a lightening storm that moved in after dark. That too, I missed.
The storm must have been substantial because we got a message from some friends in the Key Largo area, hoping that we were all right. Apparently we were, having not heard or seen any of the storm.
It's also a sign that we are progressing as locals when we are making friends here that will inquire about our well being in the event of bad weather. That makes us happy.
Posted by Swing Set at 7:50 AM