The Care and Feeding of THE BOAT 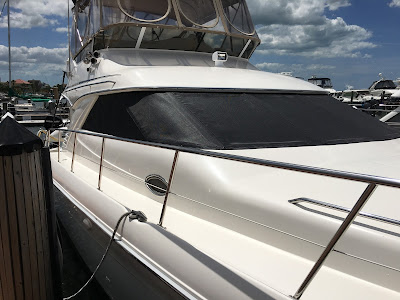 In this picture you can see where I mounted the electric horns, as well as the spotlight. You won't notice that the sunshade is new too, but it is.
When we replaced the bimini back in Key West, a new screen was ordered from Boatswain's Locker, but marrying it to the side curtains posed a problem, and we "made do" until a better solution was found, and that came in the form of Chuck Henry of Suncoast Marine Canvas based in Palm Harbor, Fl.
I had gotten two bids for a new wrap around sunshade from a couple of vendors recommended from some other boat owners at the marina, but then I called Chuck and he came by within a couple of days to give me a bid, which we did in another couple of days. He beat the other two bids by hundreds of dollars, and he had the job done in the promised time. He pulls a trailer and does the work on site, and he is meticulous. He was a pleasure to work with for sure. The screen is now all one piece and it tucks nicely up under the overhang of the forepeak, hiding those unsightly black streaks that appear after rain rolls off of that part of the boat.
This was last spring, and about the same time our attention was directed again to the SeaDek that covered our steps in the cockpit. Two of the pads began "melting" within days of installation, (after much tribulations dealing with SeaDek and the vendor) and since we were on a roll with improvements to Swing Set, Rosie found a vendor in the area who installed  PlasDeck, a faux teak product that we've been considering for years. We called them.
Jonathan Bigalow was the "them", a one man show who does marine flooring in the Tampa/St.Pete area, helming a company named Underway Custom Marine Flooring. In March of this year, Jonathan came to Marker 1 Marina with some ideas and some samples, and we arrived at a plan to improve the looks of Swing Set, outside and inside. 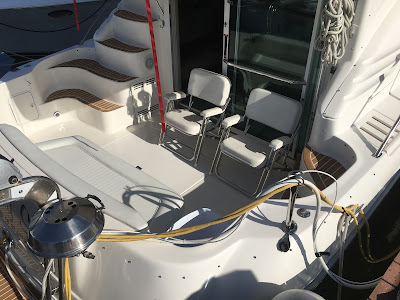 The PlasDeck is installed on the steps into the cockpit and leading to the flybridge in this photo. The product is a dense plastic composite that is installed in strips, glued down with 3M 5200, and the "caulking" is molded into the strips at the appropriate intervals. The trim is applied and gaps are caulked with the 3M 5200, and everything is sanded with a belt sander. It looks and feels like real wood and we don't expect any "melting" issues. 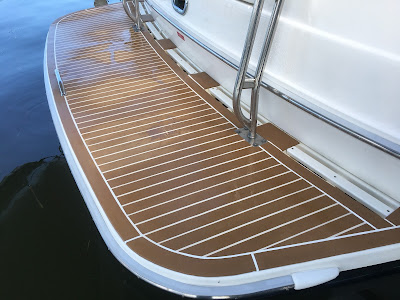 Look here, we had Jonathan install the PlasDeck on the swim platform! There were a couple of reasons for pulling the trigger and springing for the $1600 to cover this area, one was because the seagulls were habitually leaving us presents. Marine bird poop is like concrete, and removing it every weekend was getting tedious, not only that, but the hardware on the platform was continually rusting. We removed the offending hardware and installed a new handrail for the swim ladder. Any bird poop now cleans right off, usually with just a hose, and we think it looks nifty as hell. 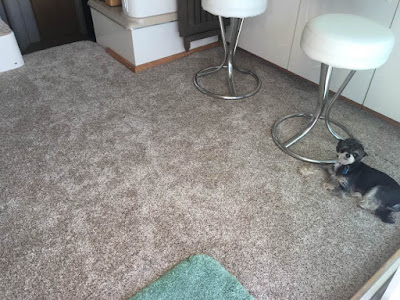